Players become Al Jazeera journalists and investigate the cyberwar in Syria while collecting information, performing interviews and having to avoid simulated hacking attempts.

Working with Al Jazeera, we created a a personalised, immersive news experience about cyber warfare (www.syhacked.com) in which players become an investigative reporter researching the Syrian Electronic Army. Players gain journalistic skills, cyber security knowledge, and an understanding of the electronic conflict in the middle east.

The experience is built entirely with our Conducttr and Communicator platforms.

Players have 5 days to collect as much information as possible and submit a news report. After being briefed by Al Jazeera journalist, Juliana Ruhfus, players chat with various fictional and real characters – including some of the world’s leading hackers and hacktivists.

Players must make meaningful choices which reveal how they should conduct journalistic investigations and the consequences their decisions have.

Research collected throughout the game is gathered in a personal notebook that builds to hold a library of infamous malware & viruses, video interviews with real world experts and eye witnesses and a timeline of historical events.

Throughout the game, various characters simulate hacks on the player and the player discovers first-hand a range of social engineering techniques as well as knowledge of RATS, Worms, Rootkits and malware delivery methods.

Players can run a Virus Scan at any time to prevent attacks and repair the device in case there is already a simulated infection. After running the scan, all the information about viruses caught is stored in the notebook, giving the details of the type of virus and the technique used to deliver it.

Most of the transmedia storytelling was removed but a nice Facebook integration survived in which players leave a special code on a fictional character’s Facebook page only to find themselves hacked in the app. This illustrates a popular social engineering technique used to hack the Syrian opposition in which an attractive woman on Facebook flirts and seduces front-line soldiers to ultimately steal the battle plans via Skype RAT.

All the simulated hacking attempts are base on real-life examples, and in many cases the original wording is used.

All external links, websites, pictures and videos shared by characters are real. This allows the audience to explore beyond the web-app and connect with real-life organisations, activists, and even check archive files and evidence.  Conducttr even pulls news about Syria from blogs and Twitter accounts and posts to an in-app live news feed.

“Track the attack, don’t get hacked” 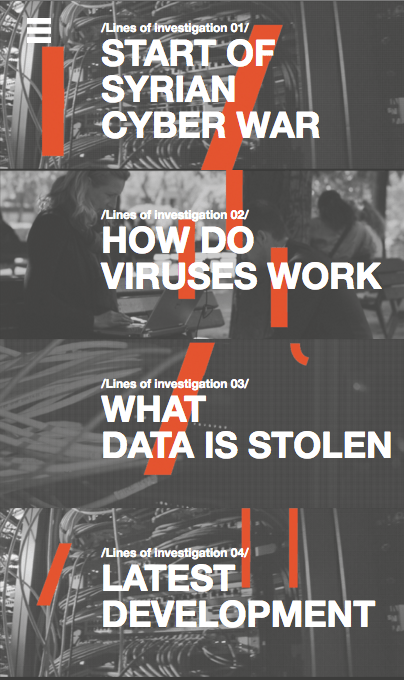